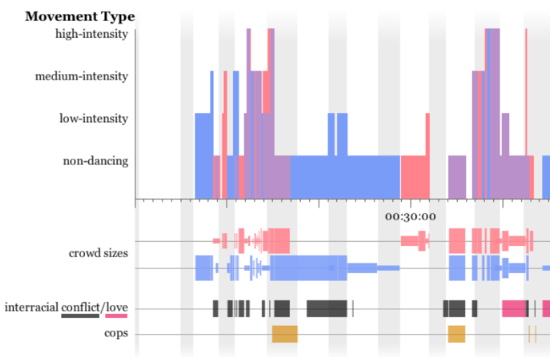 Short Description: As a research assistant for the MovieTagger project at USC, I worked with Professors Steve Anderson and Michael Naimark (of Aspen Movie Map fame) to research how close reading strategies from film studies might be put into conversation with the macro-level focus of data visualization.

While many data visualization approaches like Lev Manovich’s cultural analytics tend to focus on tracking formal features, I helped to conceptualize a project that would track more ideologically oriented data including representations of race, conflict, bodies in motion, and law enforcement for every shot across multiple films. Comparing a number of texts released before and after the 1991 beating of Rodney King, our data was able to suggest that the on-screen presence of cops usually lowers the intensity of conflict in films prior to 1991, while raising the intensity of conflict in films released immediately after – thereby, reflecting two historically specific attitudes towards law enforcement centered around this key event in American history. Stemming from my original contributions to the project, I presented my research on a number of occasions to both academic and industry audiences.

Recursive Mondrian
Back to Portfolio
The Comedie Francaise Registers Project